Now that the BF compiler is together, it’s time to add some obvious optimizations.

I’m going to approach this post a bit differently than most before it. Typically a post’s code stands on its own, but this post is largely a refactor of Part 3. I’ll focus on the diffs necessary to implement the desired optimizations. Along the way I’ll add some handy debugging code. Before I get started, this post assumes knowledge from the previous posts (especially post 3), so feel free to go back and peruse earlier posts in this series. Getting started, I want optimizations to be optional.

First up, the internal BF language representation as F#’s discriminated unions. I add addtional the intermediate representation (IR) ops to support my optimizations and debugging support. There are a multitude of optimizations that can be done. For this post I’m only going to focus on folding contiguous pointer shifts, contiguous data increment/decrements, setting a cell to zero. In addition to these optimizations, I add a debug print ? that works like ., but prints the int value instead of the standard char. It is mildly controversial to extend BF, but I find this is a minimally helpful tool for debugging.

Once I create the extended operators, I add them to AllOps DU. I also add a “No Op” operator (Nop) for cases where my folds zero out.

Here is one of the places where F# shines, code correctness. Now that I’ve added these types, my code doesn’t compile anymore. The error message is this: Incomplete pattern matches on this expression. For example, the value ‘Extended (_)’ may indicate a case not covered by the pattern(s). Looking at the code below you can see I have a match expression against the AllOps type, but I clearly don’t handle all cases, namely the ones I just added. I knew this was the case, but I’m happy when the compiler can figure out these cases. In a larger codebase that might not even be mine, this is a powerful dynamic.

Here is the new version of the match, problem solved. This obviously causes it’s own cascading effect, now I need a emitExtendedOp function.

I handle the extended operators in a similar fashion to normal operators. This also a prime time for a minor refactor. Pointer shifts and data increment/decrements for the extended versions are identical to the orignal ones except for the amount. As a result I will make the emit[Gt|Lt|Plus|Minus] to be more generic, and take a modifer amount.

Continuing the cascading changes, I refactor the operator-specific emit functions. These all have the same refactor to include the parameter and use that instead of the fixed value of 1:

Implementing emitSetx takes a value and does an explict value set to data[dataPointer].

The debug print provides two pieces of information, the current dataPointer value and the integer value at data[dataPointer]. String.Format is a bit more involved than some of the other function calls. I need to load the format string, and box the corresponding integer values. Then I can do a Console.WriteLine of the formatted string with the variable values injected.

Now that I have addressed the compilation issues and all the new emitting code, it’s time to look at the parsing code. I would typically separate parsing from optimization, making it a secondary step in the compilation. But BF is so simple, plus I can tie this back to the original goal, leverage FParsec.

The parser changes leverage existing parsers and then implement additional logic on top. pGreaterLesser reads any number of consecutive > and <, then it counts them and determines the difference. This results in the optimized operator Gtx, Ltx, or Nop. pPlusMinus works the same way. pSet matches “[-]” (loop at current position until data[dataPointer] = 0), it a straightforward match, but you may notice this is a pstring, versus pchar match. pDebugPrint is a character match. After adding the new parsers, it’s a matter of just wiring them into their respective parser groups. This is also where I check to see if optimizations are enabled or not.

With refactoring complete, I look at the Hello World program from the last post. First, debug prints.

Second, a look at the optimizations. I perform two compilations; one normal, one optimized. The results are what I’d expect to see. This sample is so short there isn’t really a peformance gain, the code is is just cleaner. On a more intense application, it’s easy to see how this code compression could add up to at least a minimal performance boost.

Below shows the compilation differences of the normal versus optimized compilation. 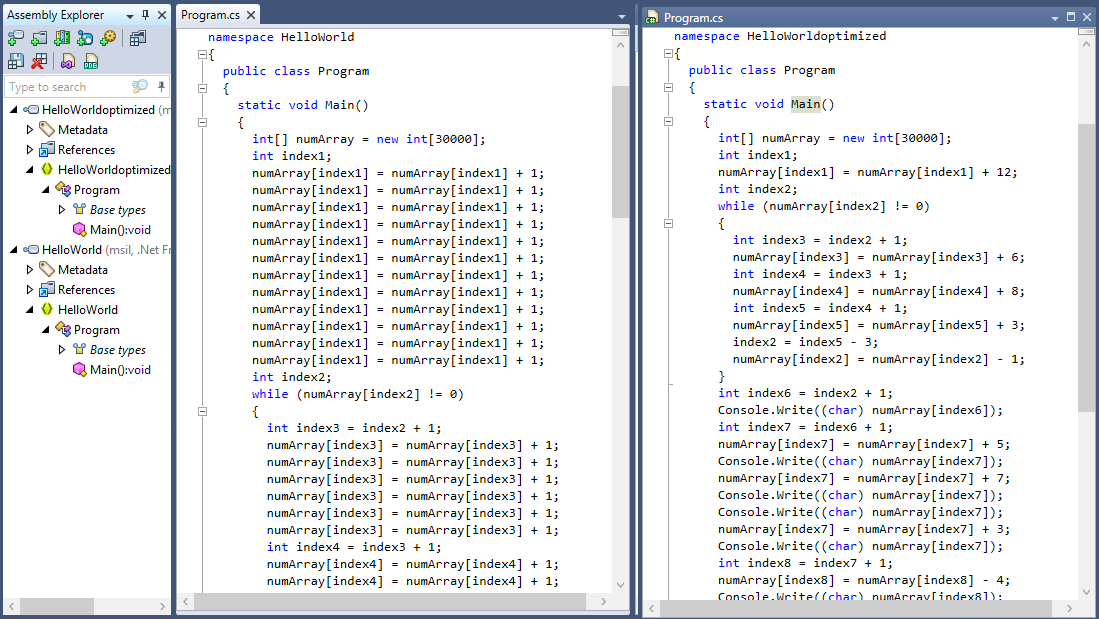 There is it. A simple refactor to add debugging and minor optimizations. I didn’t expect this to be much work, but it is nice how F# can guide me along the refactor, once I have my intentions defined. I hope you found this post to be at least a mildly useful example of the power of F# and FParsec. Until next time.